Dr. Wendy Woloson’s Spring 2019 course, titled Museums in the Digital Age, culminated in a large, collaborative final project: the development of an exhibition that would be housed in the Paul Robeson Library at Rutgers-Camden. The class roster consisted of six graduate students: Ernest Arians, McKenna Britton, Lucy Davis, Olivia Errico, William Krakower, and Allie Todd. Over the course of the semester, the team of students worked together to decide upon a theme, gather objects, create label text, develop an integrative activity, and install the exhibition as a whole. The installation date: April 1st. The final result: Rutgers-Camden, A Campus in Flux.

Lucy Davis offers an introductory summary of the exhibition.

From a single room in 1926 to a growing urban campus in 2019, Rutgers–Camden has been anything but static in its nearly century-long existence. The university opened as the South Jersey Law School, providing professional legal training to students in South Jersey – one of the first schools to serve this area. Campus soon expanded to include room for undergraduate classes and more professional program. In the school’s early years, graduating classes averaged around thirty students. Today, almost seven thousand students pursue degrees in seventy academic programs, soon to join our community of more than fifty thousand alumni.

Though we entered the Rutgers banner in 1950, our campus never lost its unique identity and culture, forged separate from that of our parent university. Through academic achievements, sports victories and losses, civic engagement, and campus events, students of Rutgers–Camden forged their own diverse community of scholars. And when forces threaten that community, as in an attempted 2012 merger with other nearby colleges to create a University of South Jersey, Rutgers–Camden students rallied to Keep Rutgers in South Jersey.

The exhibit Rutgers Camden: A Campus in Flux showcases some of the artifacts and images that tell this history, from our founding days into the present. Through four thematic cases and a companion book, we explore the history of our campus, the impact Rutgers–Camden has had on its students, and the changes students have made to their university, to Camden, and to the world. 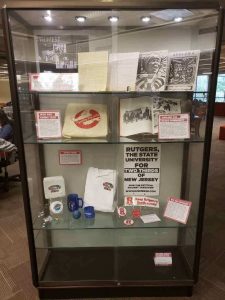 My favorite part of putting together this case was learning about the history of student activism on the Rutgers-Camden campus. One of the first things I was told when I started here, was that this was an apolitical campus, but looking at the history shows that that’s not true! Students in the past have been involved in national political movements, like the sit-in movement and the Vietnam War protests, as well as more local efforts, such as the action to stop the Rutgers-Camden and Rowan merger. I hope that this exhibit helps reveal some of this history and inspire student activism today. 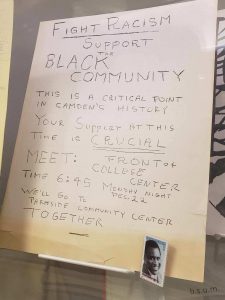 My favorite object in the display is the “Fight Racism” flyer. It shows Rutgers-Camden students coming together to get involved in the wider community. I am also interested in how this flyer was made. It appears to have been photocopied onto the back of a unrelated campus communication; I imagine the students making these flyers working quickly and using whatever materials they could find to get the word out.

Allie Todd talks Events and Entertainment, the exhibit case she was in charge of.

Concerts, comedians, comic-cons: since it’s beginnings, Rutgers-Camden has hosted a wide variety of events to encourage student participation and socialization. So many university alumni, when asked about their college experience, claim that the years spent on campus were the best of their lives. The events and gatherings organized by student groups and faculty members play a large role in these memorable college experiences. At Rutgers-Camden, past and present events range from Greek Week to the International Food Festival, 24-hour film festivals to annual Prom dances. Rutgers-Camden has come up with many new and unique events to keep up with the changing interests and needs of the student body. 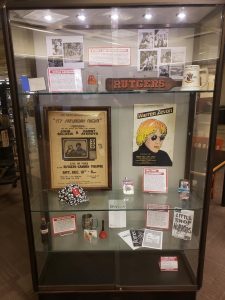 I really enjoyed treasure hunting through all of the memorabilia at the Campus Center, Dean’s Office, and Alumni House. It was awesome to sift through all of that history – this was my favorite part of putting together my case, and the others, as well.

My favorite object displayed in my case is the John Belushi and Danny Aykroyd poster – they’re some of my favorite comedians from my childhood and I was thrilled to find that poster.

Why a case on events and entertainment? The events that the school put son are so important for student morale and bonding. They are also a big draw for new students; going to a school that provides a lot of opportunities for events such as concerts is incentive to go to Rutgers!

William Krakower introduces his case that focuses on Athletics at Rutgers-Camden. 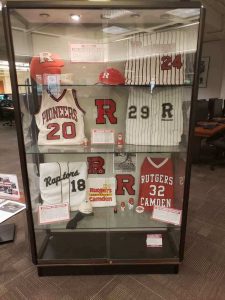 Today, Rutgers-Camden offers seventeen men and women’s athletic teams for students to participate in. Rutgers athletics has an exciting past, filled with victory, defeat, and determination. I designed and developed this case with the purpose of honoring the various achievements of our athletics teams and department, as well as those to come.

I was very excited to display the various different types of uniforms used by the athletic department. We do so much here at Rutgers and an awesome example of that is the diversity we find in our school’s athletic uniforms and jerseys. Beyond that, I’ve displayed several uniforms from when we weren’t the Scarlet Raptors. Most students don’t realize that until 2000 we were the Pioneers! Our school’s development can be found in every case in this exhibit, and here we can see tangible evidence of those changes. 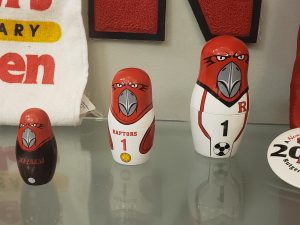 In addition to the uniforms, the exhibit showcases a series Scarlet Knights gear, golf paraphernalia, and other accouterments of Rutgers Athletics. The RU-Camden Scarlet Raptors nesting dolls are a favorite of mine.  They’re the type of thing I would like to have on my work desk.

Rutgers-Camden has more than sixty years of athletic achievement. I hope that when visitors see the case, they will see the accomplishments of Rutgers’ past, and ask themselves: what will you accomplish here?

McKenna Britton and Ernest Arians teamed together to develop the Academics exhibit case. The two also served as co-project managers, leading their team in the development of the exhibition as a whole. 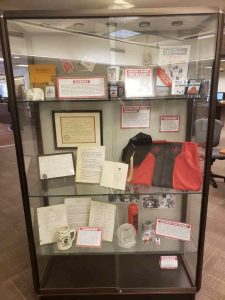 Ernie introduces the case’s theme, as well as the overall breadth of the exhibit.

Looking at the growth of Rutgers-Camden’s academic program gives us a well-rounded perception on the Universities’ adaptation to fit an ever-changing career field. As Rutgers began to grow to incubus more fields of study, th e institution was able to attract a more diverse student body, which would benefit the overall growth and prosperity of what we call Rutgers-Camden today. The items that are on display in the Library serve as a physical representation of how the academic program grew in size and complexity.

I think Ernie and I both agree that our favorite part of putting together the exhibition with our teammates was the treasure hunting. We loved jumping from the Campus Center to the Alumni House, from Cal Maradonna’s office to Special Collections, pointing out things and grabbing others to be included in the display. It was so fun seeing what each place held in their possession, from foam football helmets and Scarlet Raptor bobbleheads to old university documents and Oktoberfest memorabilia. 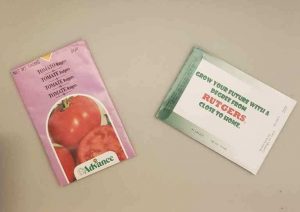 In our case, my favorite objects are kind of weird: the tomato seeds Velcro-d to the backdrop on the top shelf, and the CD-rom cases from the IT help desk on the bottom shelf. I also really love the small dance card in Allie’s Events and Entertainment case. It’s on the very top shelf to the left, and it dates back to the 1930s. Together, these objects sort of embody the crazy broad range of memorabilia that our university has produced throughout the decades –and the fun that was had coming up with new ideas for these items. 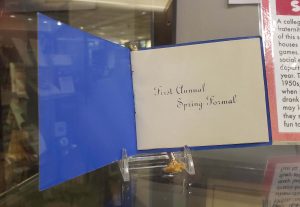 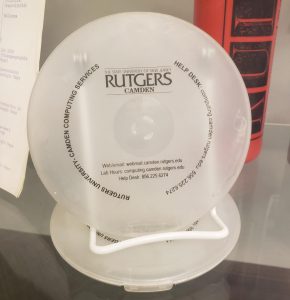 Have you been in the library to see the students’ exhibits? If not, have no fear! Rutgers-Camden: A Campus in Flux will be on display through the summer months. Visit the exhibit in the library, support your history graduate students, and learn a little more about the history of Rutgers-Camden and the various genres of material culture the campus has produced throughout the years. Before you go, leave your mark on the exhibition: to the left of the cases sits a binder full of photographs that trace the evolution of our campus, organized and pieced together by Lucy Davis. After flipping through the visual aid, feel free to respond to the prompts that are included at the end of the binder. We want to hear from you: what makes Rutgers-Camden home to you? What can you, or have you, accomplished here? You’re already playing a tangible part in the history of the campus – by sharing your thoughts, you’re playing a tangible part in the exhibit, too.